For the last two weeks I have been working on a fanart Destiny figure. And I got so many questions about how I did this, and what kind of stuff it’s made of.. So I thought putting it all together in one big blogpost would be cool.

This is a DIY post – So I will explain all the steps I’ve made to make a figure. Of course, this is not an easy DIY and it does take a lot of time. Especially if it’s a figure with a ton of details.

Everything started with being a fan of the game destiny from bungie. My husband and I are both very addicted gamers. And a few weeks earlier, my husband said, it would be cool to have figures of our characters. Me being an actual sculptor thought:“Well this is a REAL challenge!“ So I thought about it and made my desicion. I would at least TRY it. I haven’t been sculpting since late 2011 and for some reasons I just stopped and walked away from it.

It was kind of a revival as I orderd all the stuff I needed. 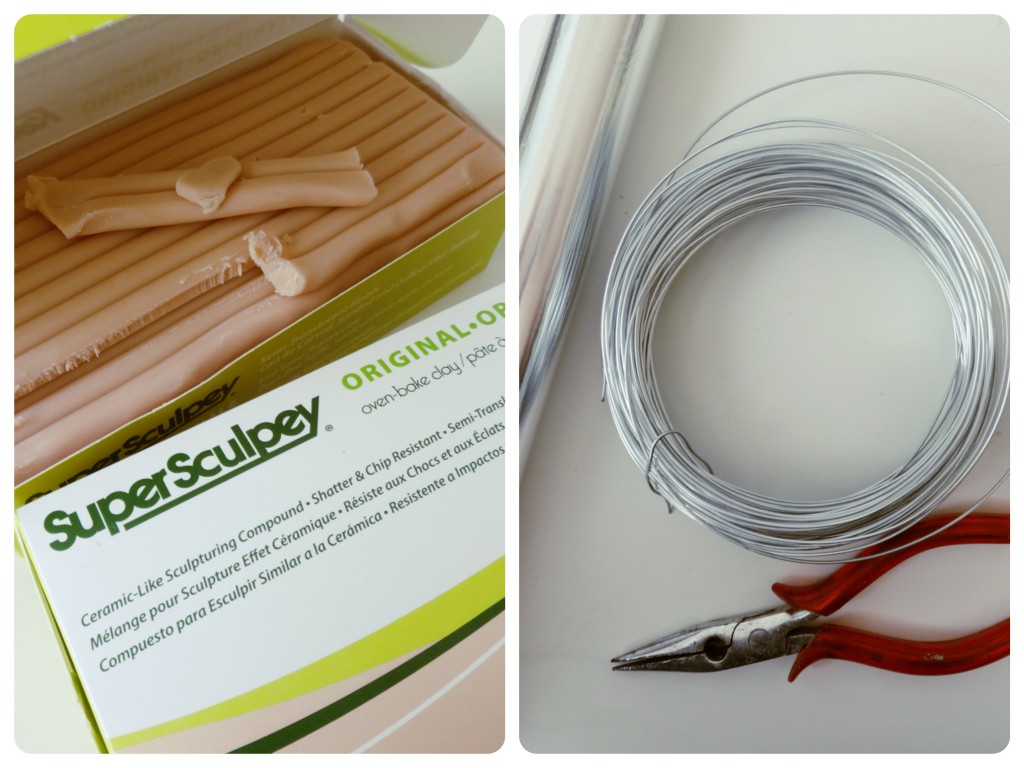 IMPORTANT! – Super sculpey has to be baked in an oven to harden it. So don’t build anything flamabale inside or outside the figure! If you are going for a bigger figure and it does not fit into the oven, you’ll need a hot air gun!

In the meantime, I roamend through my destiny vault and had to decide which gear our character should be wearing. And which weapon we wanted.

We picked the most recent crota armor (hunter), the exotic helmet arachnoid ATS/8 and the fatebringer (atheon raid) handcannon.

I’ve made a lot of screenshots from head to toe to get every glimspe and every detail of the armor and weapon. When I am sculpting, it has to be 100% accurate. (this is really just me at work – I don’t like to make reductions.)

For the first figure after a very long time, I wanted to do a simple pose. Nothing to difficult, something solid. So the figure wouldn’t flip over on it’s own due to the lack of underconstruction. This leads me to: 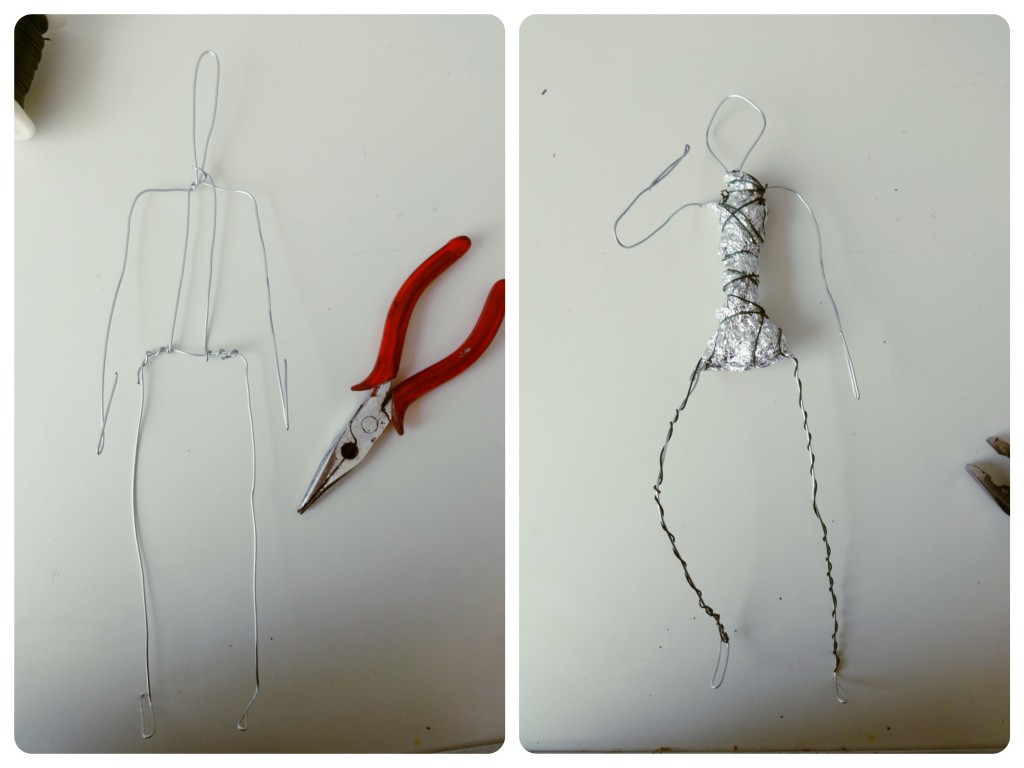 This is the most important part! If you don’t get this right, it will mess up everything in the process of sculpting. You don’t want to cut of a finished piece and start over again just because the wire is sticking out or there is to much tinfoil etc.

First thing you have to do is building a wire stick figure. (see picture) Make sure the proportions and pose are acurate! In case of doubt, make it smaller than bigger – Building up with supersupley is always possibile.

Next build up some tinfoil around the parts where more super  sculpey would be needed. For Example: The Torso.  Don’t go to overboard with the tin foil! You don’t just want a thin layer of supersculpy above the tinfoil – This would crack to easily. The layer of super sculpey should be at least as thick as a thumb. And please make sure the tinfoil is crumpled well! You will put pressure on it due to the process of sculpting the polymerclay around it.

Next is the bottom where the figure will be standing on. For this I also used tinfoil as a base. 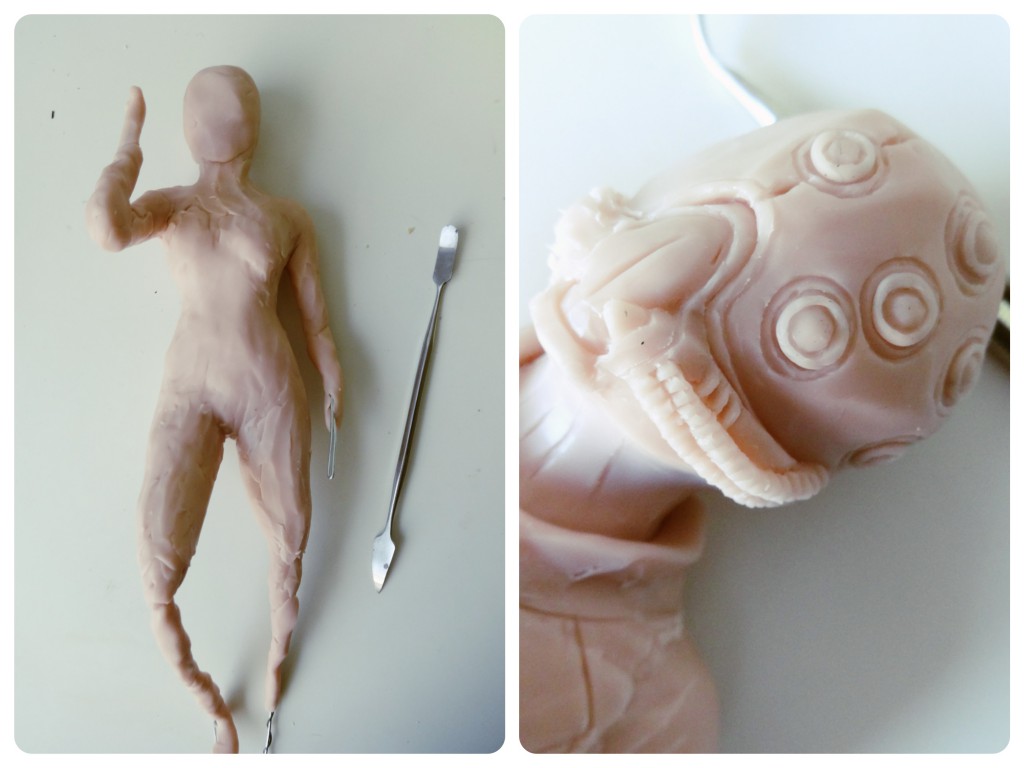 As you might have noticed – The figure and the bottom are not connected yet. I just wanted to have freedom to move the figure around while building up with the super sculpey. This way I can still correct any mistakes without taking everything apart. Once I was satisfied with the outcome and the proportions, I fixed the figure on the bottom part. For this I used the thicker iron bars. Sadly I have no image of this, but this illustration will show you, what I have done.

Once the figure is finnaly standing stable, the real fun begins. Sculpting! 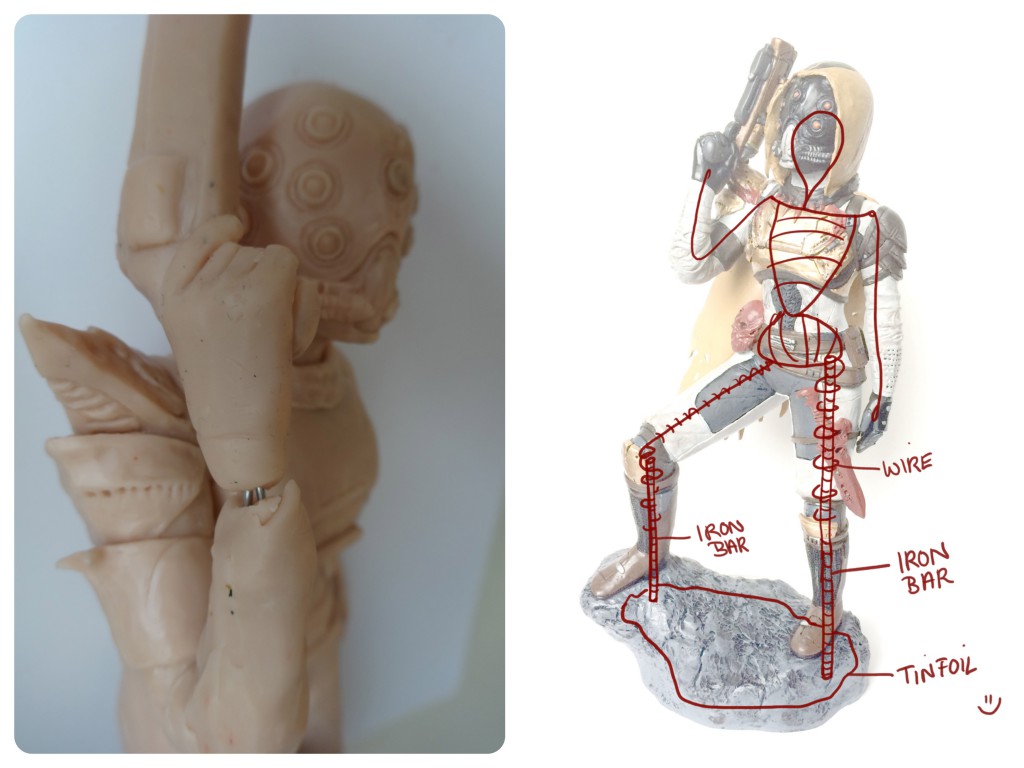 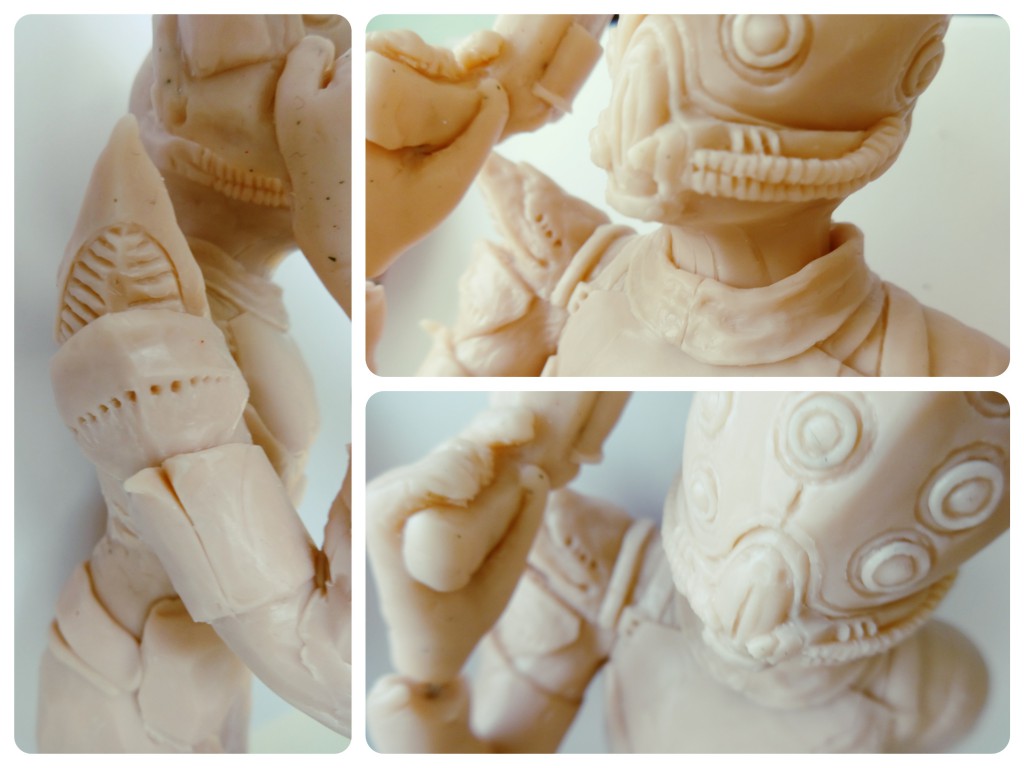 There is not much I can say about this. I just start doing it. But I always watch out for proportions and angles to make sure that everything is correct. The sculpting tools that I use are from the dental department. I don’t know why, but I just like them. You can use any tool you want.

Here are som pictures of the progress – I start from the top, so I don’t mess anything up when  I am sculpting around it. Head, chest, arms, tummy & back, legs and the bottom at last. 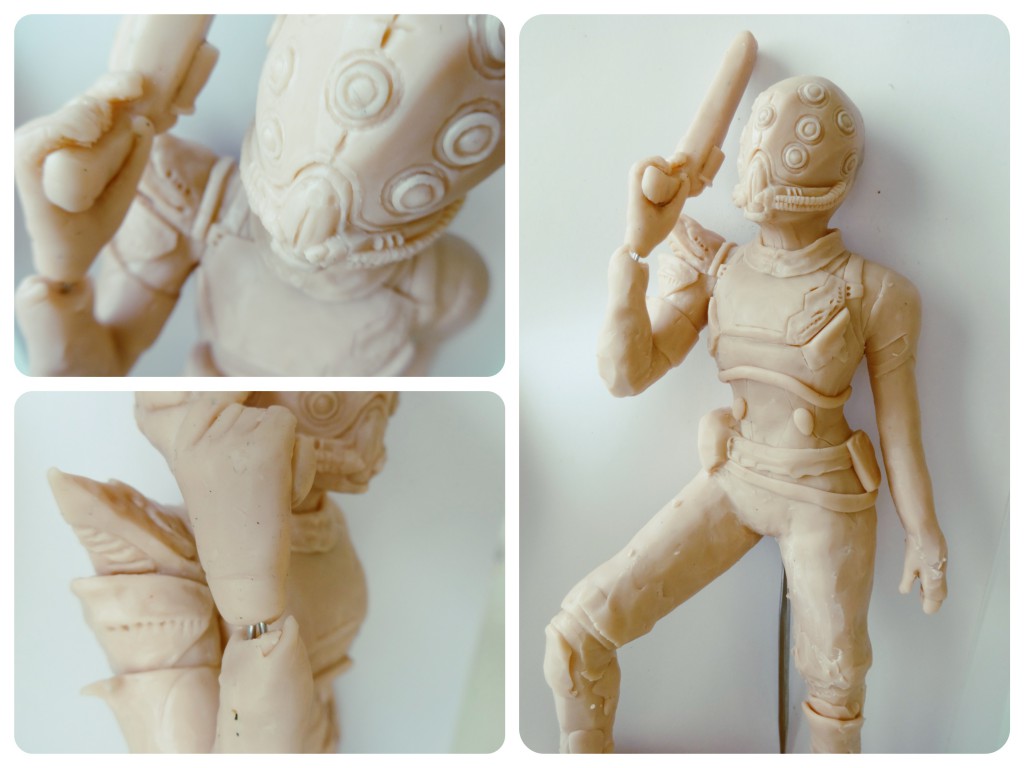 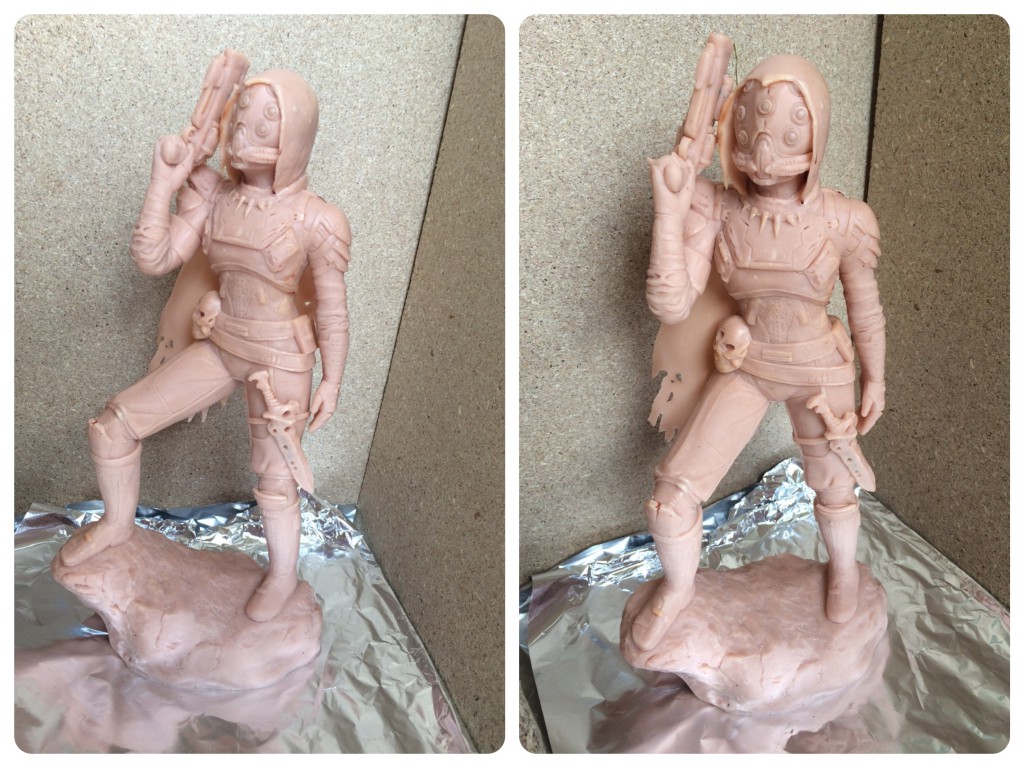 If the figure is finally finished, it’s time to bake it in the oven. 15-20min at 120-140° should do it. Watch out – Supersculpey CAN deform and burn if it is to hot! Also if it’s freshly baked, it will harden out when it cools down. So be careful in this state – I can break easily. Let it cool for an hour. 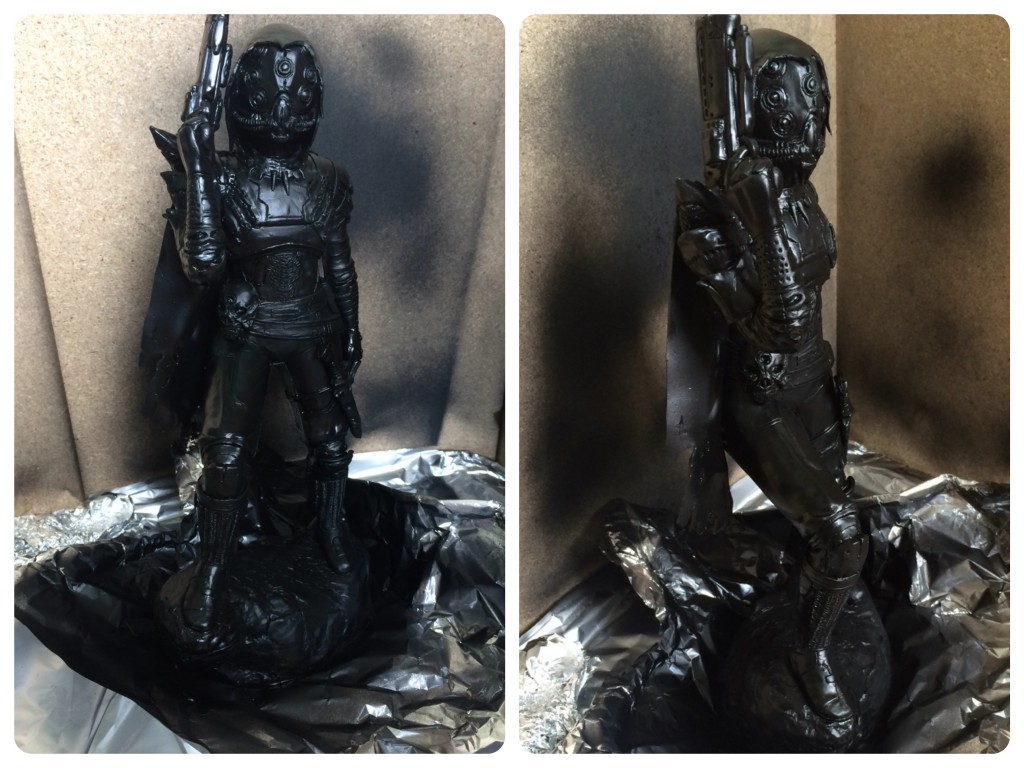 You can start right away after it has cooled down. You can use almost any color you want. Acryl or guache, everything that is covering at a high level. I like to spray on a black undercoat and paint on top of that. The colors I use are Enamel paint from Revell. When I am done, the figure get’s a thin layer of clear acrylic spray as a finish. 🙂 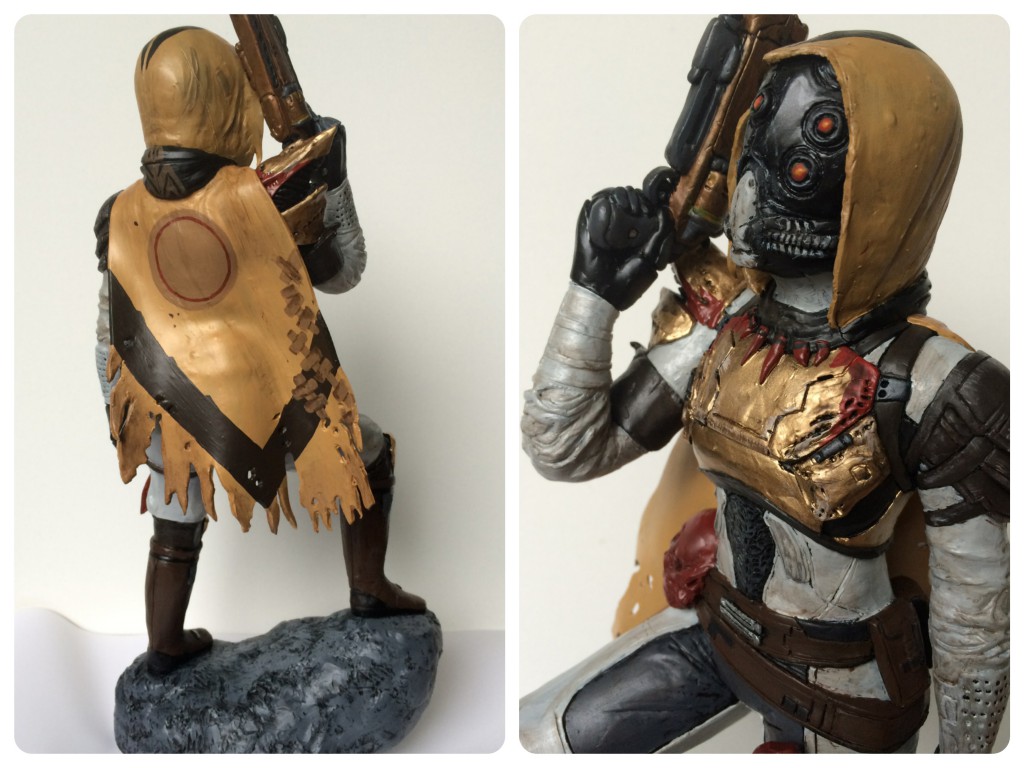 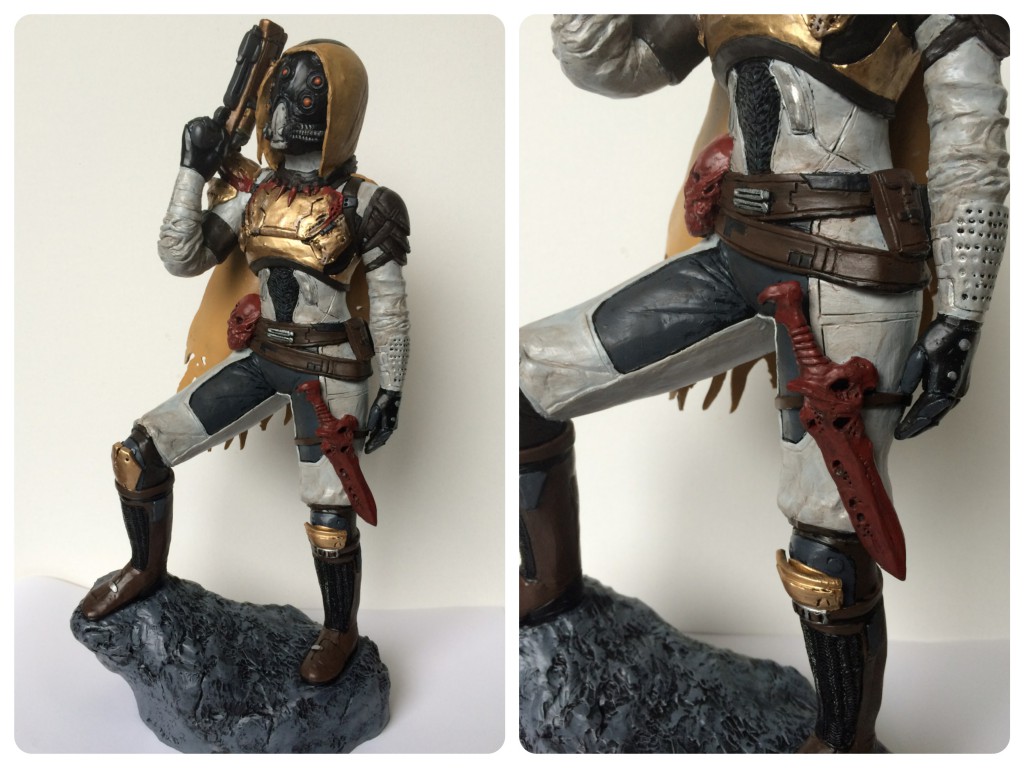 If you have any questions – feel free to send me an email! 🙂

Welcome to millamo – the illustrated history! As the name itself already says, i write and illustrate facts, bios and events from history.

My illustrations are also soon available on etsy, if you want to decorate your home with fascinating history in modern illustration.